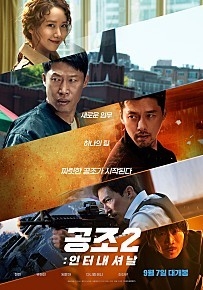 Confidential Assignment 2: International is a South Korean action-comedy film directed by Lee Suk-hoon. It serves as a follow-up movie to the film the 2017 film Confidential Assignment. The film stars Hyun Bin, Yoo Hae-jin, Im Yoon-ah, Daniel Henney, and Jin-Seon Kyu. The film was released on September 7th, 2022.
The movie begins in New York City where a leader of a North Korean criminal organiation, Jang Myong-jun is about to be transferred to North Korea but he escapes with the help of North Korean gangsters. After the escape, he sneaks into Seoul and North Korean government sends Im Cheol-ryong, a North Korean officer in special force to retrieve him. The background of the movie changes into Seoul and South Korean police, Kang Jin-tae begins to investigate to chase Myong-jun with Cheol-ryong. But their investigation is interrupted by an FBI agent named Jack who tries to take Myong-jun back to U.S. on charges of killing FBI officials. The movie depicts the collaboration of North and South Koreans and American investigation agencies to capture Myong-Jun.