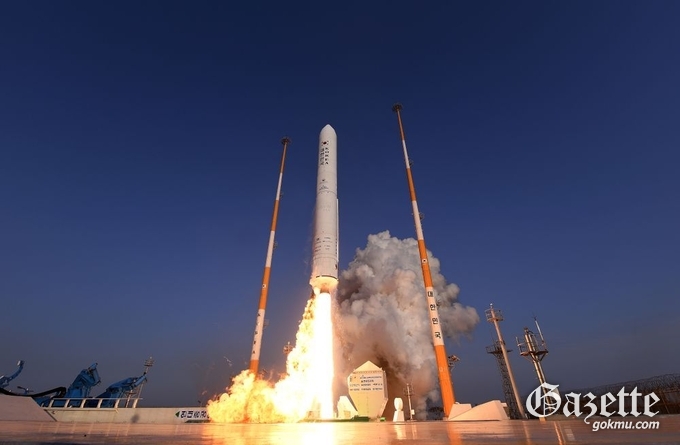 On October 21, South Korea’s self- developed space rocket Nuri had its first launch from the Nuri Space Center in Goheung. Nuri, which is also formally known as KSLV-II, is a three-stage launch vehicle. The rocket has been in development by the Korea Aerospace Research Institute (KARI) for the last 11 years. The South Korean government has invested approximately two trillion won for the project, which has required 370,000 parts and 184 engine testes involving 300 local companies. The vehicle is 47.2 m long and 3.5 m in diameter with a weight of 200 metric tons. The plan was for it to carry a 1.5 ton dummy satellite into space and put it into low orbit some 600-800 kilometers above the Earth.

For the Nuri launch to be successful, the rocket should safely lift off and drop its payload into the targeted orbit. The key point of the launch is the right time of the separation of the three stages. The Nuri flew to an altitude of 700 kilometers without any problem for 16 minutes, which means the first two stages performed as expected. However, the third stage failed to place the mock payload into the intended orbit. KARI has previously stated that only about 30 percent of newly built spacecraft succeed on their first attempt. Most of the South Korean press said the Nuri launch was a 90 percent success. KARI has scheduled another launch of Nuri for May 2022.

So why is South Korea so passionate about successfully launching a spacecraft? Globally, only six countries (the US, Russia, France, China, India, and Japan) have developed a space launch vehicle that could send a one ton satellite. If South Korea one day succeed as those countries have, it would imply a big potential of South Korea’s space technology. After Nuri has launched successfully, South Korea could be able to launch 100 satellites in the following ten years which would lead South Korea to have its own version of the Global Positioning System. Space is a huge frontier with many practical uses and potential development. Many people believe that space will be directly connected to national security and economic prosperity in the future. So, knowing all this, people can understand the importance of South Korea’s attempt to join the space industry and why more than 80 other countries are trying to get involved in space development.

After the next launch of Nuri in May, three more launches have been scheduled for 2024, 2026, and 2027. Also, more issues related to space development are waiting, like the launch of South Korea’s space vehicle that is the improved version of Nuri and 2030 lunar probe. With the launch of Nuri, some people are calling for a reorganization of the governance system that can consistently and strongly promote the space technology development plan. Some experts claim an organization that will lead the space industry with expertise and continuity, such as NASA, is also needed in South Korea. With the growing interest caused by the Nuri launch, South Korean space technology development is needed for the future and to help Korea to grow its position in the world.