Every year, there is a unique week with Africa. The Korea-Africa Foundation (KAF) held the ‘2021 Africa Week’ cultural event with the ‘African Group of Ambassadors in Korea’ to mark an Africa Day (25th of May).

KAF was established in June 2018 as an affiliation of the Ministry of Foreign Affairs of Korea (MOFA), with the mission of promoting genuine partnership with the African continent in political, economic, cultural, academic and other areas. Also, KAF aims to serve as a platform for collaboration between the private and public sectors, strengthen exchange and cooperation with African countries and enhance mutual understanding so that Korean youth, businesses and organizations can explore a new dimension of possibilities together with the African continent that is dynamically unfolding its boundless potential.

Africa Day was designated to commemorate the founding day of the Organization of African Unity (OAU) on 25 May 1963. For 2021, Africa Week was held from the May 24 to June 6. 2021 Africa Week provides an opportunity to gain a new understanding of Africa through film festivals and cultural performances. It is held to raise the awareness of the African nations and to promote exchange and cooperation between the Korean and African cultural industries. There are two main events for the week: the Africa Film Festival and Africa Culture Ground. Previously, all events were held normally, but since 2020, almost every event has been held online because of the pandemic. For 2021, people can enjoy all the events through Naver TV and Youtube. 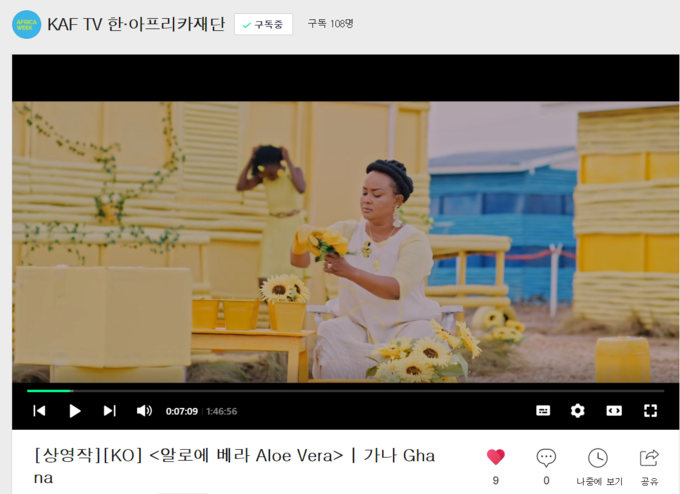 The ‘Africa Film Festival’ has two sessions. The first session is an online screening of African films recommended by the African Diplomacy Corps in Korea. A total of 10 films are provided from the following countries. Ghana, Nigeria, Republic of South Africa, Morocco, Angola, Egypt, Zambia, Kenya, Côte d'Ivoire and Tunisia. During the two weeks, which is the Africa Week period, people can enjoy all the movies whenever they want in Naver TV for free. It can be the best opportunity to approach to the African culture. Because it is not easy to watch the African movie with Korean subtitles. The second session is called ‘Hareem’s music café next to the cinema’. Hareem is the honorary ambassador of KAF, who as well- known as singer and cultural producer. The session features a new and in-depth reinterpretation of African film music, mainly by cultural producer Harim and other artists. In addition to the honorary ambassadors of KAF, Laure Mafo (Pansori Singer) and some important film composers and Broadcaster Kyung-rim Park join that session. This session People can gain some insights within the rendezvous of African film and music.

For ‘Africa Culture Ground’, KAF gives some opportunity to experience African cultural artistic content through five senses: sight, hearing, smell, taste and touch. This program is called ‘5 ways to enjoy Africa Day: 5! Senses’. The suggestions are art for sight, literature for hearing, coffee for smell, food for taste and instrument for touch. The overall program is conducted according to the five senses, and on June 6, the last day, the hidden sense [Sixth sense] edition will be released. 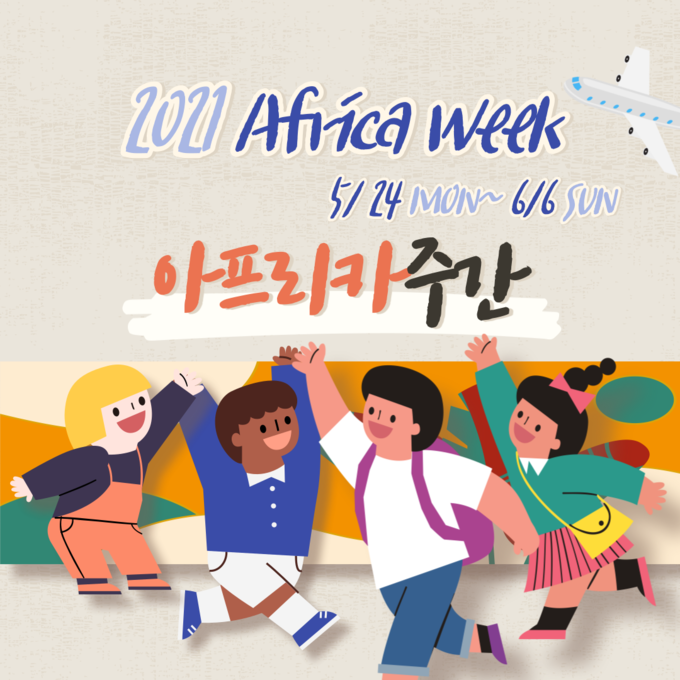 Besides the Africa Week, the 4th Model African Union Assembly will be held as well from August 26 to 27 in National Assembly Member’s Office. It is similar to Model United Nations. The African Union (AU) is an intergovernmental organization aimed at promoting regional integration, seeking common interests and positions in Africa on the international stage, regional peace, security cooperation, poverty eradication and economic development, democracy and rule of law and governance. It succeeded the Organization of African Unity (OAU) and was established in 2002. South Korea qualified as an observer of the AU in April 2005, and the Ministry of Foreign Affairs (MOFA) has held the Korea-Africa Forum (KOAF), a ministerial-level consultative body, every three to five years since 2006 to promote cooperation with the AU.

This ‘Model African Union Assembly’ is held to promote interest and understanding of African countries through opportunities to introduce the role of the African Union to youth. Participants get the chance to discuss major political, economic and social issues in Africa, and experience international conferences. The main difference from other international conference events is due to two special opportunities given to selected participating teams.

1. Meeting with the Embassy of the African country: If the selected participating teams are assigned a representative country through orientation, they will have time to visit the mission in Korea to share, discuss, and acquire knowledge to better communicate the position of the representative country.

2. Exchange with the Korean-African Student Mentors: One African student from each team will be selected to share vivid information about the country through the Korea-Africa youth exchange and, above all, access to the agenda with the youth of the country. 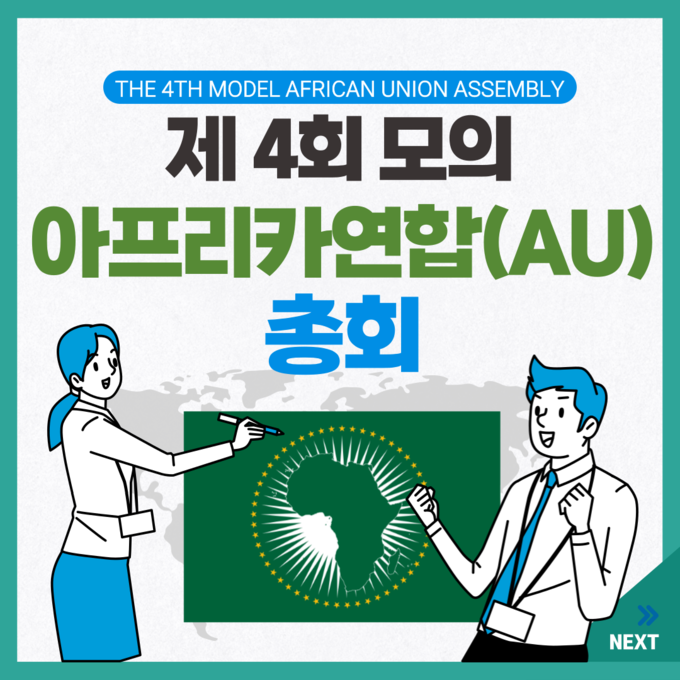 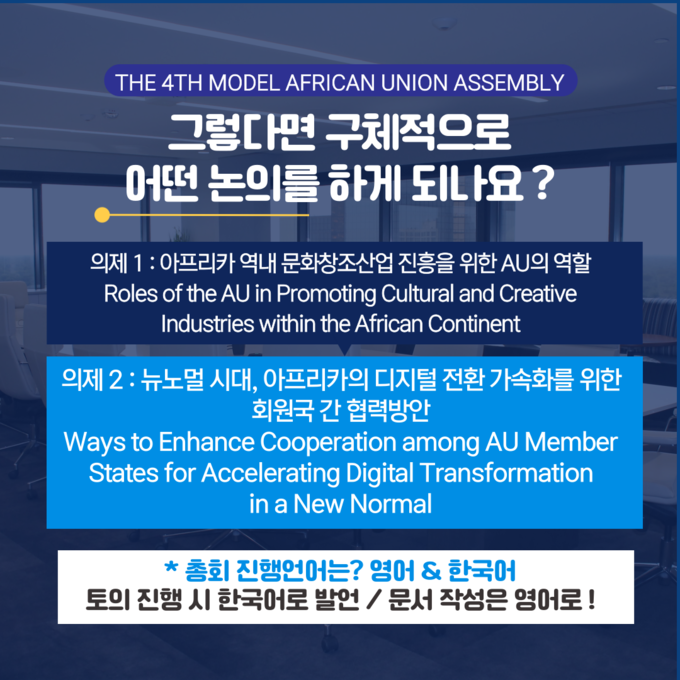 Also, it is special that the language of the general assembly is English and Korean. The final decision should be written in English in the writing language, but all the comments in the discussion are in Korean, so participants can feel a little less pressure on foreign languages and experience the way the intergovernmental international conferences are conducted. The first agenda is ‘Roles of the African Union (AU) in Promoting Cultural and Creative Industries within the African Continent’. The second agenda is ‘Ways to Enhance Cooperation among AU Member States for Accelerating Digital Transformation in a New Normal’. The winner of the Foreign Minister's Award will be given a tour to the AU headquarters in Addis Ababa, Ethiopia. In addition, the President of the National Assembly's New Age Forum’s Award, the President of the African Diplomatic Corps in Korea’s Award, and the Chairman of the KAF’s Award will be awarded. The application period is from April 23 to May 28, and each team must have two members.