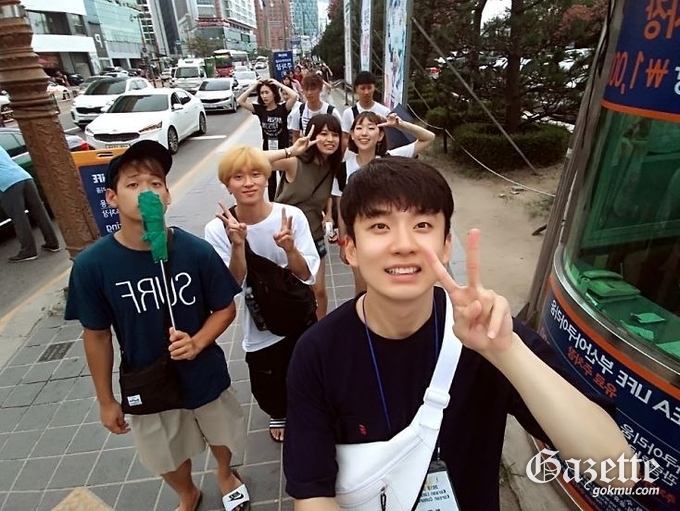 ● Jeong Jae-min and students from Japan during program.

About 20,000 students study at Keimyung University. KMU offers many programs that help students gain practical knowledge and experience related to their majors. Here is one student who developed
a lot through a Keimyung program.
Q1. Please introduce yourself.
Hello, I am Jeong Jae Min. My major is Japanese Language and literature, which I’ve studied since 2014 at Keimyung University.
Q2. Would you introduce the program that you participated in?
I participated in a program that Keimyung University’s Center for International Affairs held. It is a Korean language and culture program for students from Japan who attend sister universities of KMU.
With them, we looked around Kim Kwang-Seok Street, E-World, Daegu modern history streets, Daegu Art Museum, Donghwasa Temple and downtown Daegu. We also traveled to Busan and Gyeongju where we experienced Korean culture.

Q3. How did you know about and why did you participate in this program?
I didn’t have a specific plan during vacation. I didn’t want to have a meaningless vacation.
While I was looking for something to do during vacation, a professor recommend this program to me. I thought I could enhance my Japanese conversation ability, and that it would be a good experience for
me.
Q4. Did you have any difficulties during this program?
I participated in this program as a translator for the visiting Japanese students. Even though I am majoring in Japanese language, basically, they and I use different languages. So, it was difficult to converse and to explain Korean culture to the Japanese students. Moreover, taking care of them was physically and emotionally tiring.
Q5. What did you get from this program?
I got paid for my work like a part-time job. Besides that, I made new Japanese friends, and I learned Japanese culture while I taught Korean culture. Furthermore, my language ability significantly improved. I talked with them so much that I was thinking and speaking mostly Japanese. When I went back home after an activity, I sometimes replied to my mother in Japanese unconsciously.
Q6. Did you have to prepare for this program such as get a language teaching certificate?
In this program, I served as a translator, so I needed good conversation ability. For that, I acquired JLPT (Japanese Language Proficiency Test) N1 level. I also studied informal language. Not only JLPT but also any Japanese certificates will be helpful. Even if you have such certificates, practical conversation ability is more important than grammatical knowledge.