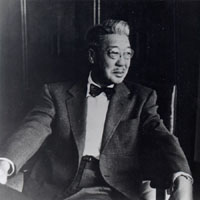 Yuhan Corporation is the most famous pharmaceutical company in Korea. If you go to a pharmacy, you can easily find medicines made by Yuhan. The corporation’s trademark willow tree is familiar to many Koreans. Yuhan’s image was made by Dr. New Il-han. His life was dedicated to his country, ill people, and students. He was the most famous CEO in Korea. Many people respect his honest spirit.

New Il-han was born in 1895 in Pyongyang. However, when he was nine years old, he went abroad to study in America. Later, he graduated from the University of Michigan. He established the La Choy Food Product Inc. in 1922, and he became a successful businessman in America. However, he wanted to do business in Korea. Therefore, he came back to Korea for market research. When he arrived in Seoul, he saw many poor people. The people had serious illnesses. However, they couldn’t buy medicine. They needed food and medicine. He determined to establish a pharmaceutical company in Korea.

New Il-han established the Yuhan Corporation in Seoul in 1926. Yuhan imported medicine from America. The company sold tuberculosis medicine and antiphlamine. Antiphlamine is one of the famous ointments in Korea. It is good for bruises, muscular pain, lumbago, frostbite, and itchiness. It was the first product which was made by Yuhan in 1933.

New Il-han wanted to be called an educator more than a businessman. He was concerned about Korea’s education. He always said that companies should help to educate and develop human resources. Therefore, he established Yuhan Junior College and Yuhan Technical High School, and he donated 17,000 shares of Yuhan stock to Yonsei University to promote medical science education. When he died in 1971, his dying words were, “I donate all my stock to Yuhan’s school foundation.” He always thought that education was very important for a strong country.

New Il-han said, “A corporation’s profit must be used for society.” New Il-han’s spirit made a respectable company. He was a rare businessman in Korea.