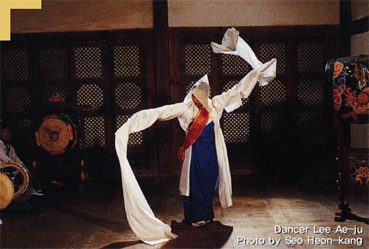 The white silk cowl folded gently
wavers like a butterfly.

A bluish head, shaved close
veiled under the fine cowl.

The glow on her cheeks
pretty as a sorrow.

A candlelight burns silently
on an empty altar.

The moon skins into
every paulownia leaf.

Her long sleeves flow up
against the vast heaven,

Oh, how her shapely white socks
turned up so slightly

as if flying on the wing.
Raising her dark eyes softly,

she gazes at a single star
in the far-off sky.

Her fair peach blossom cheeks
adorned with a teardrop or tow.

Like a star shine her agonies
if painful are her worldly cares.

Swaying, bending and folding again
her hands are stretched out

as if telling of a devout prayer in her heart.
As the crickets cry away the night

her white silk cowl folded gently
wavers like a butterfly.

That was a poem about seungmu written by Jo Ji-woon. This poem greatly contributed to the popularization of seungmu dance in modern society. It is one of the major Korean traditional dances and was designated in 1969 as important intangible cultural asset No.27.

This solo dance uses long-sleeved Buddhist robes and bubgo, a drum used in Buddhist rituals. The letter "seung" of seungmu means Buddhist monk in Korean, and the letter "mu" means dance. Seungmu derives from bubgo dance, a Buddhist ritual dance which is very similar to seungmu. You can see that seungmu is influenced by Buddhism. However, it was once prohibited during the Joseon Dynasty, and then it was transformed into a folk dance and developed mostly by gisaengs, who were singing and dancing girls.

Many researchers consider seungmu the best Korean dance because its costumes are very colorful, it has the widest range of motions, and it has diverse rhythms from the drums. A dancer puts a white silken hood on their head, wears a black or a white long-sleeved Buddhist robe, and adds a red surplice to the left shoulder. The harmony of the three colors shows an aesthetic sense. Black symbolizes a strong intention, white symbolizes brightness and purity, and red symbolizes love and passion.

The movements of seungmu are splendid and magnificent thanks to the spatial formations created by the dancers' long-sleeved Buddhist robes. Shoulder movements make graceful waves to the ends of the long-sleeves and through the waist to the toe of the traditional Korean socks. Slow-paced temperate foot movements express calmness in movements and movements in calmness.

The beating of drums by dancers is an important part of the dance and raises amusement and tension. The tonal sound of the drum is made through harmonies that recall a noble thrill of the soul, and the harmony is set up by the special techniques of hitting the centre and edge of the drum and by hitting the two drum sticks together.

"Seungmu has a much deeper meaning than most people believe nowadays," said Lee Ae-ju, a leading seungmu performer and professor at Seoul National University's Department of Physical Education. She emphasized, "Seungmu is a very philosophical dance. It expresses our traditional philosophy of heaven and earth, and their harmony." Seungmu is the essence of Korean traditional dance.

Seungmu is passed on by just a few dancers nowadays and now it is not easy to see the dance. Seungmu needs more public exposure and more performances open to the public.
Choi Shin-hye 의 전체기사 보기
Choi Shin-hye dbflght@kmu.ac.kr
< Copyright 2006 gokmu.com / The Keimyung Gazette. All rights reserved.>